The Watanabe Gym today held a press conference in Tokyo and announced a super strawweight unification title fight between their fighter, the WBA champion Ryoichi Taguchi against Filipino, Milan Melindo, the IBF Champion.

The title fight will be held on the prestigious Japanese fight night of New Years Eve at the Ota-City General Gymnasium in Tokyo. This will be Taguchi’s (26-2-2 12 KOs) first New Years Eve main event showcase though he’s been featured on four previous New Years Eve undercards, all in support of previous Watanabe Gym stablemate and long-time super featherweight champion Takashi Uchiyama. With Uchiyama retiring earlier this year it was natural for Taguchi to ascend into the main event. There was speculation that Japanese super flyweight champion Naoya Inoue would inherit New Years Eve honors this time around but his lackluster opponent that was announced earlier today wasn’t enough to outbid a unification title fight featuring Ryoichi Taguchi, whose risen in popularity each year since winning the title in 2014.

Last year at the same time Taguchi fought to a draw against Carlos Canizales then rebounded and scored a TKO against Robert Barrera in July. Taguchi will be defending his title for the 7th time. 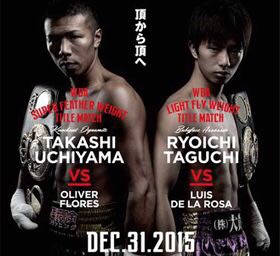 For Melindo (37-2 13 KOs) the fight will cap a very busy year that saw him win the title in stunning fashion with a first round KO against three-division champion Akira Yaegashi last May, before successfully defending the title in September against Hekkie Budler. Melindo’s silent rise could result in becoming a unified champion who won both titles in enemy territory within a very short time span- similar to how Julius Indongo had recently unified two belts before succumbing to a Terrence Crawford clinic.

Both fighters have a lot to gain from this fight and even more to lose. Waking up early in the West and catching this bout online from the Far East looks to be a great choice for fans to close out what has already been a stellar year for boxing.

The fight will be aired on TBS (Tokyo Broadcasting System)