Midway through July the rumors are flying through boxing. While a slow month, traditionally the big fights revolve around Cinco de Mayo in the spring and Mexican Independence Day September 16th. The lull before and in-between both dates are ripe with rumors and boxers positioning for the biggest fights they can get. No Sparring jumps right into the thick of it to get you all caught up and prepared for what’s in store next.

Who will Floyd Mayweather fight?

According to Las Vegas bookies, the odds on favorite to land a summer gig opposite of the champ is journey man Andre Berto. Berto has been in several fight’s that elevated other boxers to more prominent fights including giving them a chance at Floyd himself! While never being able to get beyond the top ten type boxers, Berto has racked up a couple of wins lately and is always entertaining. Berto also has the same advisor as Mayweather making the fight easy to make.

While other fight’s are out there for Floyd, nobody in the division is making noise to really warrant a shot at the title. Tim Bradley would be the best option in terms of ranked opponents; Kell Brook and Keith Thurman are both poised to take over the division in the future; Amir Khan is always available; Triple G “GGG” is too big. I wouldn’t be shocked or disappointed if Floyd chooses Berto. With Berto we may see a fight where with his youth and power he may just try to throw bombs and look for that knockout, a lucky punch, creating an entertaining scenario for fight fans.

Will Floyd’s next be free on CBS?

While an opponent has yet to be named, rumors are already swirling that for Floyd’s apparent last fight it may end up on CBS. Floyd signed a record deal with Showtime which is owned by CBS and has one fight left on his contract. After the Pacquiao fight that left many with a bad taste in their mouth after shelling out big bucks for a lack luster PPV, a free fight could definitely get fans to tune in. After Pacquiao there’s no one beyond possibly Tim Bradley that could get the average fan to want to buy in to another Mayweather fight and Bradley is even stretching it.

Mayweather’s advisor Al Haymon has invested heavily over the last few months on getting Premiere Boxing Champions on free tv for the public to view as fights are traditionally on paid cable channels like HBO and Showtime. Fights have been aired on NBC, CBS, ESPN, and Spike TV so far. Putting Floyd Mayweather on for the masses would definitely give boxing a shot in the arm for exposure. Though boxers like Floyd generally make their millions in PPV revenue, it’s possible that with the right advertisers and incentives from CBS that Floyd could be swayed in agreeing to this arrangement. 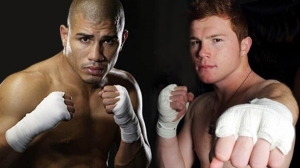 We may hear an announcement on the fight as soon as this week. It was understood before Cotto’s last fight that the two party’s had agreed to face each other in the scenario that both won their interim fights. With that happening and HBO on board the last bit of details are being ironed out including fight location. New York would be feasible but a definite advantage for the Puerto Rican Miguel Cotto who regularly fights in the city to sold out crowds. Dallas Cowboy Stadium would also do well in the fight though would favor more of the Latino crowd in Texas who would support Mexican superstar Canelo Alvarez. It has been said Las Vegas is the front runner to land the bout and it could be staged at the MGM Grand this November.

After much deliberation and word that Oscar de la Hoya was “50-50” on a return, the Golden Boy has opted to stay retired. Having last fought and lost to Manny Pacquiao in 2008, De La Hoya had been calling on Floyd Mayweather Jr. to face the dangerous “Triple G” Gennady Golovkin with himself taking on the winner.

Shane Mosely is now un-retired and will take on fellow un-retired boxer Ricardo Mayorga. After a twitter war the two are ready to tango and will get it on at the end of August, potentially on PPV and potentially and logically in Southern California.

Carl Froch is…is annoying everyone. After more than a year into psuedo-retirement Froch tells us he will make a decision in the beginning of June and then does nothing. Recently he was mocking Triple G by claiming he was “too big and strong for GGG.” No one, not even his own promoter knows what Froch will do but we all wish he’d make up his mind soon and quit the games on twitter. Update: Froch officially retires!

No longer a rumor! The two Mexican punchers will get it on at the Staples Center on August 29th. This will mark a significant upgrade in competition for both sluggers as under the advisement of Al Haymon they’ve dodged tough competition for over a year. This should be a helluva show for the fans and a true Mexican war.

As mentioned above, Al Haymon and company have invested serious money into major networks for showcasing his clientele. It’s been going great in the opinion of No Sparring. More fight’s with more competition on free tv is good for everyone. Haymon is facing hundreds of millions of dollars in lawsuits from Golden Boy Promotions and Top Rank respectively. While those cases drag on let’s hope Haymon continues to go big because I’m loving the progression boxing has taken under his watch while his competitors scramble to make big fights of their own.

As the boxing world continues to revolve around Floyd Mayweather and his next fight we look forward to hearing what fights are made and seeing who decides to step up to make a name for themselves as the post-Mayweathr era is fast approaching. No Sparring will be taking a break over the next few weeks but you can continue to see updates on the No Sparring Facebook and Twitter pages when major announcements hit the record.