The loaded question for years has been “when will we see Floyd Mayweather vs Manny Pacquiao?” The fans banter back and forth saying one fighter is scared of the other. As issues have come and gone in negotiations for the fight, one sharp thorn stuck in the side for Mayweather: Bob Arum and his Top Rank company.

For years boxers were at the beheast of their promoters. They would accept terms without real room to negotiate because the promters ruled all. If you wanted to fight on tv you had to have a promoter that was in with the networks.

Don King (pictured below) was that man for Mike Tyson for several years. He took large portions of the purse that Tyson made in his fights and had other stipulations contracted that bled Iron Mike dry. Tyson wasn’t the first or the last boxer to be taken advantage of by their promotion team. 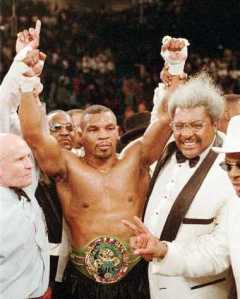 In 2000, Congress enacted the Muhammad Ali Boxing Reform Act. The object was to among other things, expand the protection of boxers against “ exploitation, conflict of interest…” and other nefarious activities that could be considered harmful to a boxers career. Rigged rankings, darkroom deals, and contracts made by promoters without oversight, or open competition, led congress to take action.

As Don King faded, two promotional companies took over the helm. Bob Arum had built one of those company’s years before congress ever took action. His company Top Rank had a deep bench of fighters that included Floyd Mayweather and Oscar De La Hoya, who endured the old school promotional tactics. As De La Hoya expanded his star power, his fortune grew and he eventually broke away from Bob. Oscar started his own promotional company that would rival Top Rank. It was appropriately named after his ring pseudonym. He called it “Golden Boy.”

Golden Boy would offer an alternative for boxers who preferred to be represented by a boxer who had their best interests at heart. Not surprisingly, boxers flocked. Golden Boy began putting on large shows on HBO that would offer fighters a chance to make more money and have more control of their careers.

Floyd Mayweather would also break away from Top Rank and began promoting himself. His fights are to this day still promoted in partnership with Golden Boy, although he reserves every right to control how his fights are arraigned in every aspect. Those details include fight location, opponents, purse, etc.

With boxing now a more healthy market, competition grew for bigger and better fights. Network’s HBO and Showtime tried to represent themselves as the home for boxing entertainment. The network’s themselves would sign boxers to exclusive contracts to have the rights to air and promote their fights and their name. Still, Top Rank and Golden Boy would have their boxers fight each other and both would co-promote the fights so each would retain revenue for their fighter’s work.

Later, Manny Pacquiao was signed to both promotional companies and the matter had to be taken to court. Oscar De La Hoya had reportedly offered Manny a briefcase full of cash and tried to sign him to an exclusive contract. The courts decided Manny would be with Bob Arum and Top Rank (pictured with Arum below).

When Pacquiao and Mayweather first tried to negotiate a fight in 2010 the deal fell apart over drug testing stipulations and purse allowances. Each side blamed the other for having their promotional teams hold up the negotiations and the fight never materialized. A “cold war” officially began between the two promotional tycoons. Each tried to amass more fighters than the other and they stopped doing business with each other in the process.

In 2013 the cold war would be taken to another level when HBO announced it would no longer do business with Golden Boy. Showtime followed suit and said it wouldn’t do business with Top Rank. Now the trenches were deeper and neither side was going to blink first. Media squabbles continued in the press and on social media.

Still, the public held out hope for a mega fight between Floyd Mayweather and Manny Pacquiao. There seemed to finally be light at the end of the tunnel when the contract Manny held with Top Rank was scheduled to be obsolete at the end of 2014. Manny could become a free agent, easily secure the Mayweather fight and even go back to Top Rank afterwards if he preferred. One boxer, Miguel Cotto, did just that a couple years ago. However, those hopes were dashed when Manny signed a two-year extenstion with Top Rank through 2016. When that contract ends, Floyd will be 39 and Pacquiao 38; both past their prime, with Floyd possibly retired.

With Showtime having spent in excess of $200 million for exclusive rights to Mayweather and Manny’s Top Rank aligned with HBO there leaves no chance of a fight happening between the two. Showtime executive Stephen Espinoza even tweeted “Coke and Pepsi don’t work together” suggesting that HBO is their biggest competitor and any kind of partnership, even for one fight, won’t happen.

An interesting caveat to Pacquiao’s partnership is Top Rank’s very shallow pool of competition for him to face. In fact, he’s faced Timothy Bradley and Juan Manuel Marquez twice each over his last five fights. Top Rank is even pursuing another fight between Pacquiao and Marquez for this fall! Marquez’s side has to their credit said they aren’t yet interested in a another fight, as both have fought against one another five times during their respective careers.

A “Plan B” is in place with Ruslan Provodnikov being the backup fighter incase Marquez doesn’t sign on. What happens then? Top Rank doesn’t have anyone else of interest after that. Floyd meanwhile has Golden Boy and their stable of fighters to choose from. Marcos Maidana, Amir Khan, Danny Garcia, and Lucas Matthysse among others round out the list of intriguing possibilities.

The story continues a tad as infighting between executives at Golden Boy, including Oscar De La Hoya and the CEO Richard Schaeffer have become public thanks to the LA Times. Schaeffer on one hand is loyal to Showtime and has no interest in working with Bob Arum while Oscar has suggested he would like to work with Bob’s Top Rank once again. A civil war of sorts could split the company in half. That result would give Pacquiao more opponent choices though none of those being Mayweather, who still promotes himself and holds the same animosity towards Bob that Richard Schaeffer has. 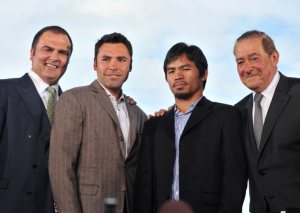 “Ali.” “Marciano.” “Tyson.” These are the names people remember. Pacquiao versus Mayweather could produce yet another or even both those names to that list. Not “Schaeffer,” “Arum,” or “Espinoza.” Unfortunately, those names are the reason the world can’t see the best fight of our generation.

The overall state of boxing was best summed up by Lou DiBella, a boxing promoter based in New York City, who use to be an executive at HBO, in a recent article on BoxingScene.com:

“I just want to make fights. I can do business [with Espinoza; with Richard Schaeffer; with Arum; with Showtime; with HBO.]” “If my fighters get an opportunity…” “…I’ll make a deal with anybody.”

“There’s too much bickering, too much hatred…”

“Our industry needs to get its shit together.”

“The fans don’t give a fuck if one network is exclusive with one guy or doesn’t want to do business with another. But the fans want to see the biggest fights and right now the atmosphere in which we’re operating doesn’t allow the biggest fights to happen!”